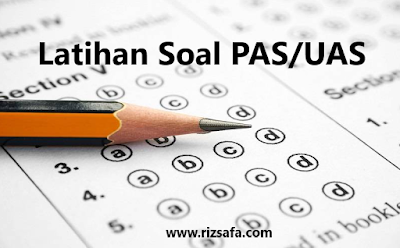 Soal UAS Bahasa Inggris Kelas 12 Semester 1
(Untuk file secara lengkap silahkan download pada link yang tersedia)
TEXT 1 for question 1-4
Once upon a time there live as neighbors, a bear and a rabbit. The rabbit was a good shot and the bear, being very clumsy, could not use an arrow to a good advantage.
The bear was very unkind to the rabbit. Every morning, the bear would call over to the rabbit and ask the rabbit to take his bow and arrows and come with the bear to the other side of the hill.
The rabbit, fearing to arouse the bear‟s anger by refusing, consented, and went with the bear. The rabbit shot enough buffalo to satisfy the bear‟s family. Indeed, he shot and killed so many that there was still lots of meat left after the bear and his family had loaded themselves and packed all they could carry home.
However, the bear was so greedy and evil that he didn‟t allow the rabbit to get any of the meat. The poor rabbit could not even taste the blood from the butchering, as the bear would throw earth on the bloods and dry it up. The poor rabbit would have to go home hungry after his hard days work.
The bear was the father of five children. The youngest boy was very kind to the rabbit. The youngest bear would take the meat outside and pretend to play ball with it, kicking it toward the rabbit‟s house, and when he got close to the door he would give the meat such a great kick that it would fly into the rabbit‟s house. In this way the poor rabbit would get his meal unknown to the papa bear.

1.What do you call the text above?
a.Descriptive
b.Recount
c. Report
d. Narrative
e. Explanation

3.What is the evidence that the bear was an unkind friend?
a.The bear didn‟t allow the rabbit to get any of the meat
b.The bear was the father of five children
c.The bear has a youngest boy very kind
d.The bear lived as neighbors with the rabbit
e.The bear gibe the bloods to the rabbit

4. Who was very kind to the rabbit?
a. Papa bear
b.Youngest boy
c.Youngest rabbit
d. The bear and youngest boy
e. The bear family

5.Complete the following dialog with the correct expression!

Situation : A friend is visiting your home. She wants to borrow some money and promises you that she will return the money as soon possible.
Your friend : Hi, I want to borrow your money Rp.100.000. I need it to pay my English book.
You : ….

6.Which is NOT TRUE sentence to show expressing a promise?
a.I promise I‟ll do whatever you want
b.I promise you that I‟ll try to be on time
c. I was just wondering how to do it
d. You have my word on it
e. I swear that my love is only for you

7. Complete the following dialog with the correct expression!

Hery : I wonder if I could fly into the clouds.
Jeni : Why not? Hery, are you OK? You look a little depressed about something.
Hery : I‟m sorry. It‟s nothing. I‟m just wondering.
Jeni : Oh, really? You can tell me. A penny for your thoughts….

„Cire perdue‟ which is the French word for „lost wax‟ is a process of wax casting used in making metal sculptures.
When a model is coated with wax, the solidified wax is encased in a two-layer mold of plaster or clay. It is then melted or otherwise removed from the mold, and metal is poured into the space; where the wax had been. Oh, I almost forgot, after cooling, the mold is broken to free the metal object.
This ancient method is used to produce sculptures, jewelry, and utilitarian products such as dentures.

9.What is lost wax?
a.Poured into the space where the wax had been
b.Encased in a two-layer mold of plaster or clay
c.Lost wax is not „cire perdue‟
d.Lost wax has the French word „cire perdue‟
e.A process of wax casting used in making sculptures

10.The following statement which is true according to the text is….
a.Cire perdue not same with lost wax
b.This ancient method is used to produce sculptures, jewelry, and utilitarian products
c.The solidified wax is encased in a three-layer mold of plaster
d.Lost wax is poured into the space where the wax had been
e.Lost wax is coated with wax

11.What is the type of the text above?
a.Report
b.Description
c. Explanation
d. Narrative
e. Discussion

12.Complete the following sentences with the most suitable abstract nouns
I think I like my friends ….
a.Beauty
b.Kindness
c.Performance
d. Behavior
e. Activities

15.Choose the best conjunction for the following sentences!
P700 named … it absorbs light in the red region of the spectrum at wavelengths of 700 nanometers.
a.If
b.After
d. Because
e. Until
c.Before

17.Which the word is NOT TRUE of action verbs?
a.Climbing
b.Kindness
c.Process
d. Computer
e. Shy

As you see, there has been a great deal of discussion on the problem of abortion in this country. The discussion includes; is abortion legal or illegal? Is abortion morally justified or not? However, in this discussion I would like to talk from different side.
To begin with, let me say that on one hand abortion is one method of birth control. Let‟s look at the fact about the population problem in a country. When a country faces the problems of population explosion, the government should find methods to solve it. But since no method of contraception is one hundred percent effective and successful, abortion becomes the only way out when prevention fails.
On the other hand, abortion may cause many negative effects for women‟s health. Women risk their health and lives in bearing the weight of the operation and its consequences. The most common complication is inflammation, interruption of menstrual patterns, infertility, endometriosis, myoma of the utures, and many other kinds of ovary illnesses.
So far, abortions have become a dilemma for countries with a large number of citizens. On one hand, it can control the birthrate but on the other hand, it brings terrible consequences, especially for women‟s health.

19.Some people support to abortion.
Which statement shows to support abortion?
a.Abortion is the last way out when prevention fails
b.Abortion is one method of birth control
c.Abortion may cause many negative effects for women health
d.Woman risk their health and lives bearing the weight of the operation
e.Abortion causes inflammation, interruption of menstrual patterns, infertility, endometriosis, etc.